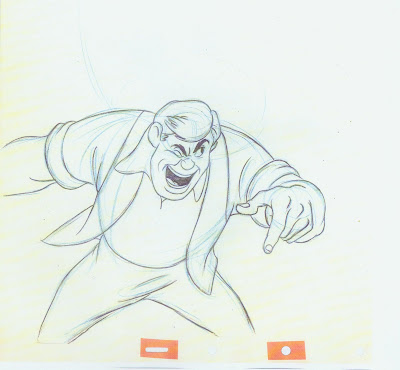 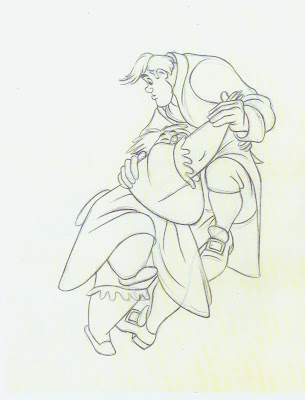 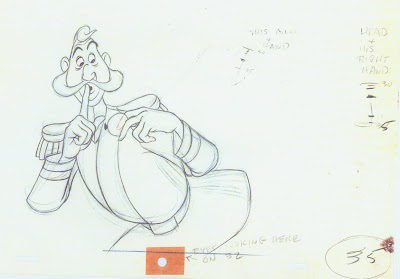 These are some of Milt's work from the 40's and 50's which was a time when the animators were at the peak of their careers.  Milt specially, could handle the human characters like no other.
Brom Bones from Ichaboad is one of my favorite.  The animation is broad but not over done and displays a high level of draftsmanship.  I really like the scene where the short girl is dancing with Brom Bones.  I don't even know how he could plan a scene like that.  It is so inventive and entertaining that I keep watching over and over again to try to understand how it was done.

The Duke, from Cinderella is also really good, not all the scenes, just Milt's.  The sequence where he is jumping up and down with the King in the bed  was done by Norman Ferguson and I really do not like that one but the ones that Milt did were amazing.

I guess these days, animation like that are considered over animated.  Directors today tend to like a more subtle kind of animation.
Posted by Sandro Cleuzo at 6:36 PM 4 comments: 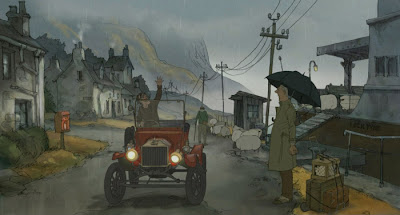 A couple of years ago I was looking for my next job and I learned about The Illusionist being produced in Scotland at Django Films.  I had been in talks with Disney about joining them again for Frog but they were taking too long to decide on a date or if I would be hired at all so I  decided to send my reel to Django films to see if I could work on their film.
After a couple of weeks they contacted me saying that Sylvain Chomet had liked my reel and  they offered me a job to animate on the film but I had to move to Scotland which I would, of course.
Well, now I had to decide what to do and was already set on to move to Scotland when Disney called with the official offer and a date to start.   I ended up going back to Disney and I missed the opportunity to work on the beautiful The Illusionist.
I do not know the story, but what I have seen so far, visually, looks great, j ust like the kind of style I love.
I think this is a great way to do traditional animation, where you can really see the pencil strokes and the backgrounds have that great painterly look of watercolor with pencil details on top.
I can't wait to see this film and I know when I see it I will think "I was this close to be a part of this".
Congratulations to Sylvain Chomet, the director and all the animators , art director and everyone else involved in this beautiful film.
Posted by Sandro Cleuzo at 2:00 AM 9 comments: 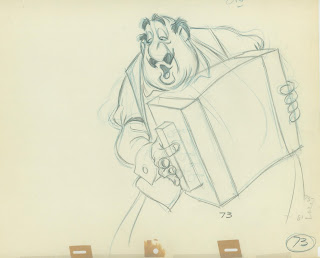 You all know I love Milt Kahl's work a lot and even have the weekly Milt Kahl day but I also admire a lot of other artists, not only from animation but fine artists, directors, art directors, musicians, etc.  I just choose to focus on the animation field for this blog.
This is the work of another great Disney artist that I love to study, John Lounsbery .  He animated some of my favorite scenes in Lady and the Tramp, like the Italian cooks and the bulldog, that I absolute think is one of the best in the movie.
Here is an original of the Italian cook that I acquired a few years ago.  I think this drawing is flawless and so beautiful and it shows the strength of this great artist.
Lounsbery also animated great scenes like the ones with king Hubert in Sleeping Beauty.  Bellow are a few more of his original drawings of Hubert that I purchased years ago 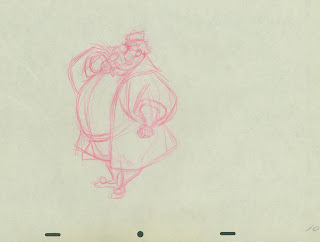 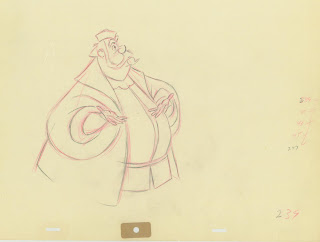 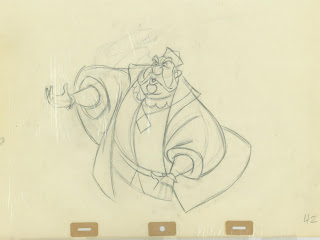 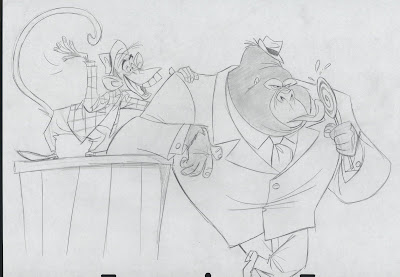 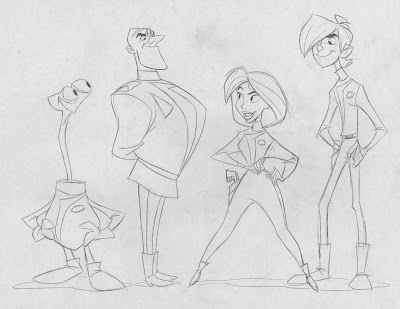 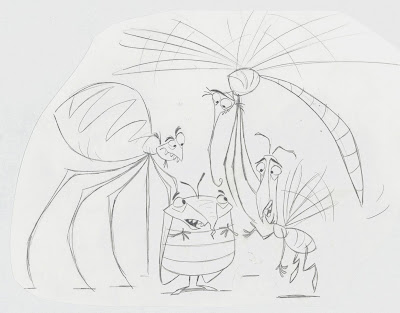 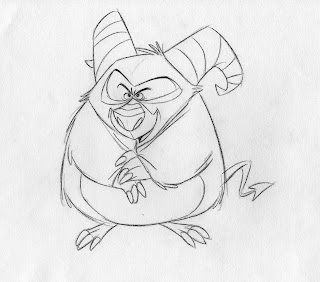 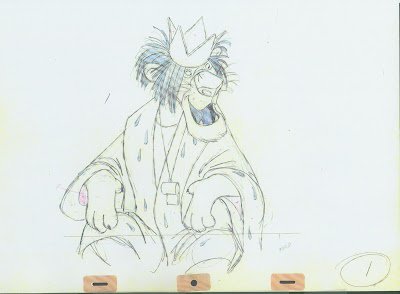 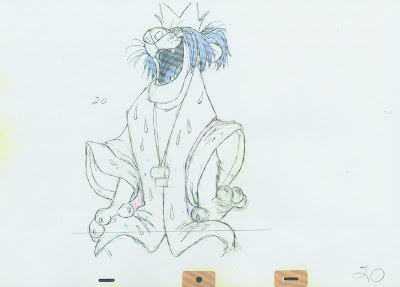 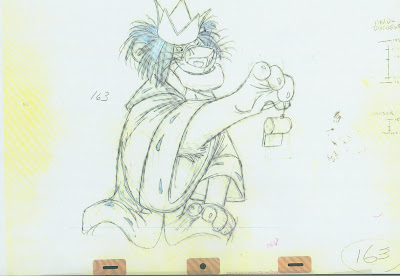 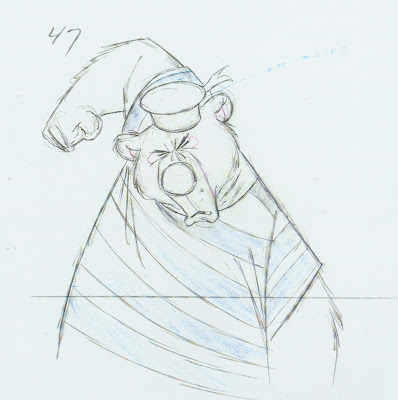 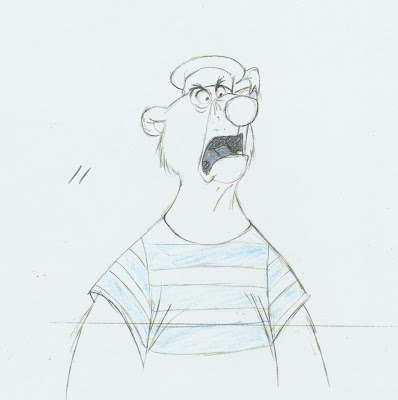 I love the animation in Bedknobs and Broomsticks.  It was the highlight of the movie for me.  Besides designing all the characters Milt animated the Lion, the bear and the secretary bird.   The lion looks a bit like Shere Kahn but that is because the way Milt drew, his style.  After all, he was the final designer for most of the Disney characters for the features.

The director of animation for the animated sequences was Ward Kimball and according to a memo to the animators that Ward wrote, he respected Milt's position as the key guy to go to get drawings checked.  In the memo, he says that all animators should show their scenes to Mr. Kahl so he could approve or correct any drawings that he felt necessary to do so.

Great scenes to study are the one where the bear is fishing the bed out of the lagoon with the live action actors, the secretary bird telling the bear to throw the people back into the lagoon and the scene above with the lion.  Beautiful animation, acting and drawings.
Posted by Sandro Cleuzo at 1:45 PM 8 comments: